Paul Snakes 7 years ago in By Screen / Publish • updated by Ezra Weinstein (Administrator) 7 years ago • 1
Hi
I am still having many issues with the downloading / running shared version on iPad & nexus tablet. On iPhone and Android phones it doesn't get downloaded at all... and on iPad sometimes goes quite slowly, specially animations. Page turn curl effect doesn't appear... please, I'd need to guarantee my clients that the ebook they'll pay for will be at least executable... thanks for your efforts
Vote

0
Answer
Started
Ezra Weinstein (Administrator) 7 years ago
We are addressing the sharing issue of large apps with the upcoming version 3.4 update along with addressing the Page Turn Effects in the InteractPlayer.

0
Under review
Alin Alexandru Matei 7 years ago
The page turn effect are not currently working, this will be fixed in a future IB3 version. Other then this problem, could you tell us what problems you have with sharing the app? The process freeze or it gives you an error? In the second case could you attach the error to this topic? Thank you.

0
Paul Snakes 7 years ago
I have had several problems:

1- When I try to share with myself the ebook I have done (81 pages; about 140 MB) sometimes I get a blank message error, with nothing written on it, and only the option "OK" (see attached image) 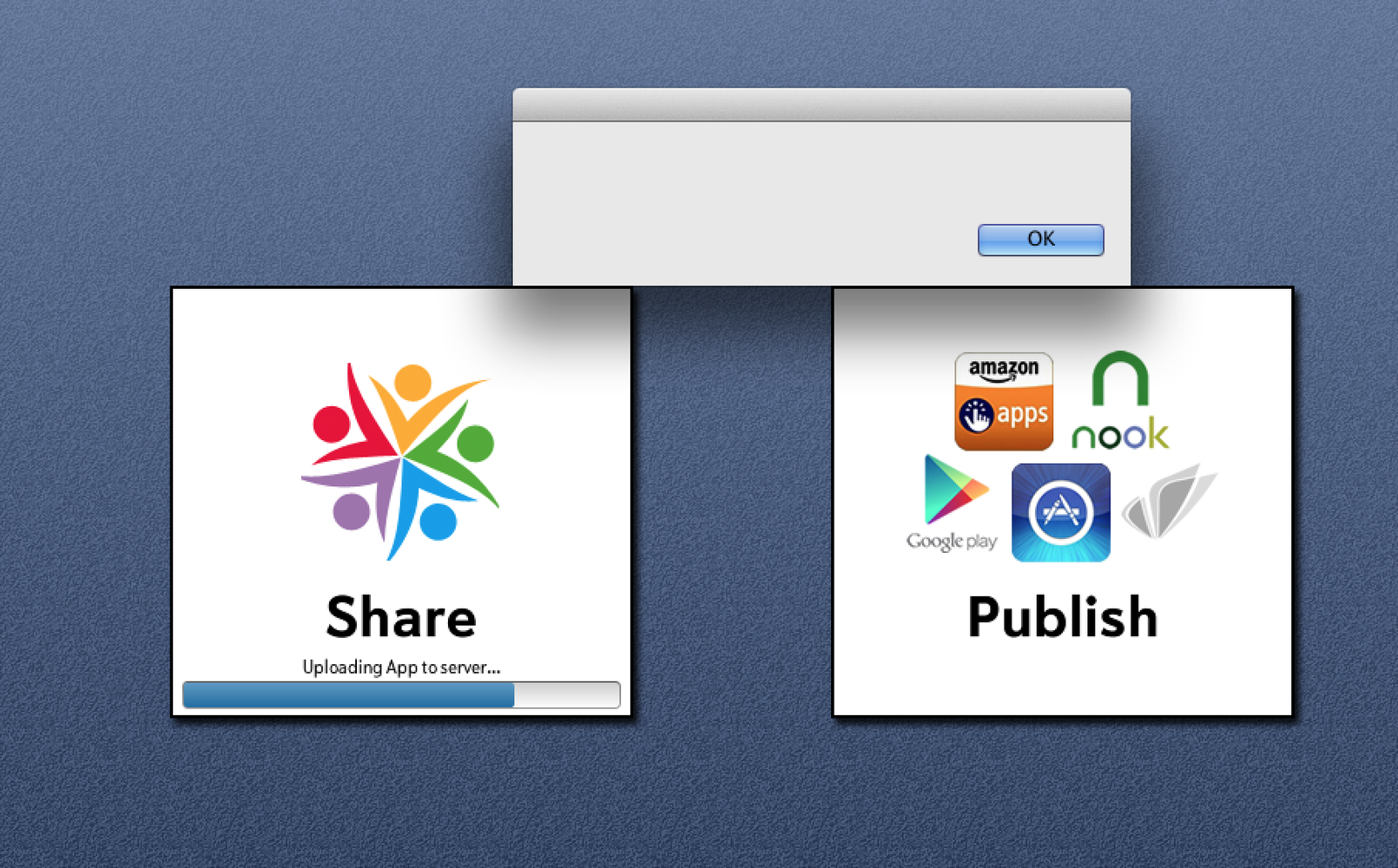 Afterwards, the blue bar is completed: and I get the normal message "your app has been uploaded to the servers and recipients notified by email..". But then, when I try to download it on my iPad; the blue bar freezes at about 2/3 of its way; and the whole player is blocked (I have to close down the player and reopen it to exit that screen). On the google nexus tablet, instead; downloading bar gets to its end, but then, the player just closes down and when I reopen it; the ebook is not on the bookcase, and it appears still on the "files to download" list. I have received this error message in some occasions:

So I have never been able to download the full version of the ebook.

2- Guessing it was a weight related problem, I tried splitting the book in two parts of 40-45 pages each, and deleting the remaining pages both in builder and its corresponding livecode files on the "ebookname" > pages folder. Then I found different results depending the device used to download the apps:

2a) on iPad, those smaller version of my ebook could be shared and downloaded normally. But when I opened them, it often appered the first page cut and moved downwards, leaving a black space above. This screen sometimes got set by its own; and the first page showed then normally. Then, usually the book run normally (only animations didn't work properly) but it eventually blocked at some screen, and tapping at the "go to next page" area, or close app button didn't work. Sometimes it blocked at the first page, and user couldn't exit that page.
2b) on the Google Nexus tablet, some of the smaller versions of the ebook could not be downloaded (the downloading bar frozed at the same point as it happened with the full version in the iPad). and others, instead, could be downloaded but not opened: none "do you want to open the app you have just downloaded?" message appeared, and when tapping the thumbnail on the bookcase nothing happened.
2c) On smartphones, the app doesn't work at all: my client reported it can't be downloaded on his iPhone; and on my Sony Ericsson Xperia phone; I can’t find the player app in google play store.
More data:
In my app; I used only fade in / out behaviours; open url & jump to page behaviours; some timers and animations. The rest of the elements are all png images and a couple of jpg.
I am running a MacBookPro Retina with 8 GB of Mem; and a 2.3GHz Intel Core i7 processor. The player is on an iPad2 with iOS7. Both Builder and Player are the latest versions.

Please, ask me whichever further info you need. I can make a test trying to share the app with you; or directly share the whole app folder with you if you want to test sharing  / publishing issues. But I'd need to fix these problems as soon as possible, or my clients might want their money refunded (I made this book for a National Park / Government Trust)

0
Answer
Started
Ezra Weinstein (Administrator) 7 years ago
We are addressing the sharing issue of large apps with the upcoming version 3.4 update along with addressing the Page Turn Effects in the InteractPlayer.